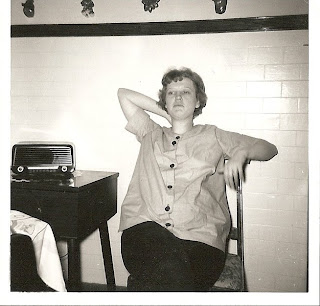 T
This is me and my Mom! 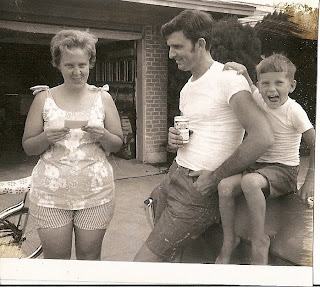 One of my most favorite photos of all time!
My mother Sharon and dad Tom, with my little brother Tommy.
Taken in Richardson, TX in the early 70s. 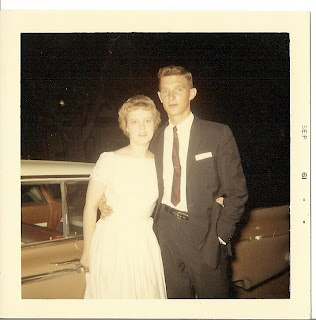 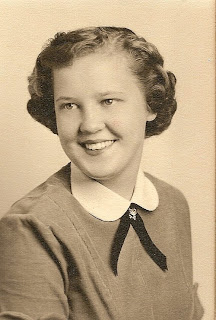 The Corrigans
The Corrigans are from my fraternal Grandmother's side of the family.  Concentrated in Oskaloosa, Iowa. 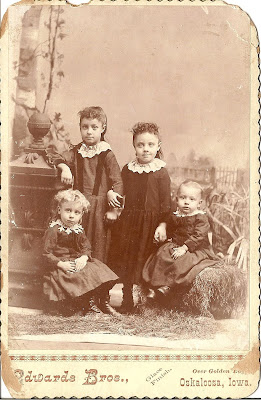 This is a picture of my Great Grandmother Frances Corrigan Anderson and her sisters. She is the one on the bottom left.
From left to right, Frances, Anna, Cecilia, and Theresa Corrigan 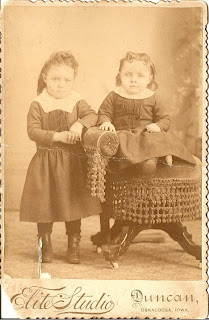 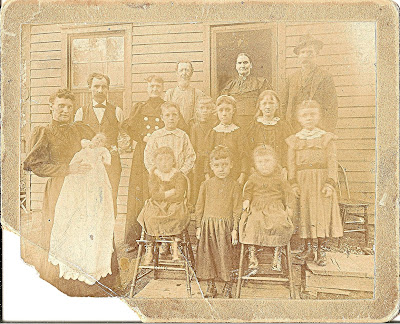 This is the Corrigan Family.  This is obviously a christening.  The man in the top row on the right is Patrick David Corrigan, next to him is Elizabeth Golden.  I am guessing that the man on the far left is Frank Corrigan and his wife Catherine holding the baby.  I think my Great Grandmother is one of the girls in the picture, Maybe the one standing in the front, but I am not sure, and the back of the photo just says "Corrigans". 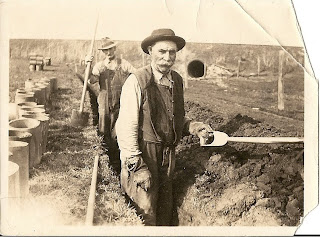 Frank Corrigan, (would be my Great Great Grandfather)  I like everything about this photograph!  It is amazing to see how they are actually digging the ditch by hand. 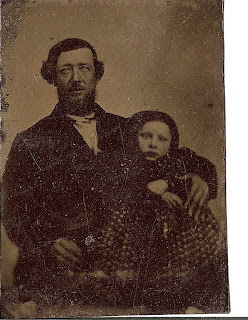 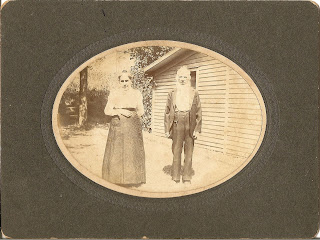 Patrick David Corrigan and his second wife.  Not sure of her name at the moment. 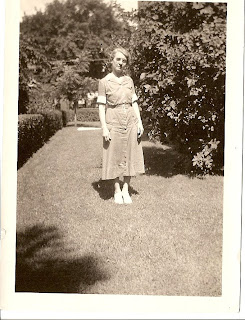 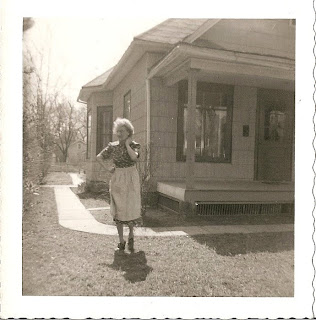 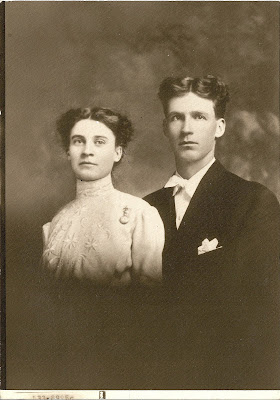 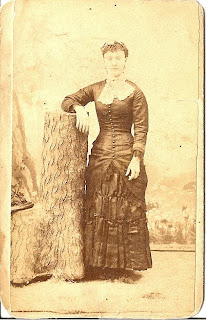 The back of this photo is noted "Uncle Frank Johnson, Grandpa Corrigan "Patrick David", Dad (Thurman Ross Anderson), Mom (Catherine Corrigan), Calvin (Grandma's brother), couple friends, unknown, and Alice"  Alice Anderson (Johnson) is my grandmother, and she is the little girl in the foreground.  Her mother, Frances is holding the baby.  My Grandmother was born in 1913, so I am putting this photo at 1916 in Oskaloosa, Iowa. 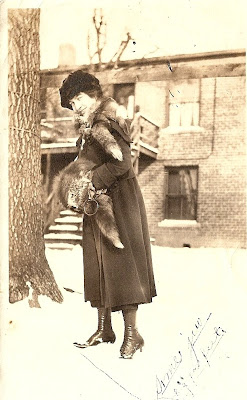 No idea who this is, but hopefully with some research I can figure it out.  This is such a quirky photo! She is wrapped in fur, standing in the snow, posed against a tree.  The notation says, "Some Jew - big fat feet"...You got to appreciate such an odd photo! 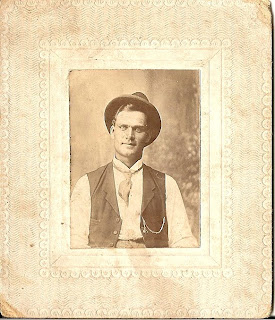 Ozzie Nevins
This is the husband of Sarah (Sadie) Guthrie Nevins. Sadie is the daughter of  Elizabeth Golden Guthrie and Andrew Guthrie. 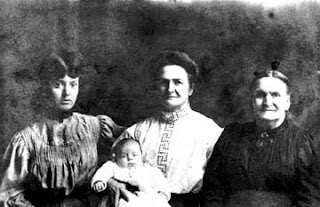 This is a picture of Maude Beryl Guthrie McDowell holding her first born, Leroy McDowell. On her right is her mother Elizabeth Golden Guthrie, and the extreme right is her grandmother Sarah Warden.

Munson/Anderson
These are some photos from my mom's side of the family. 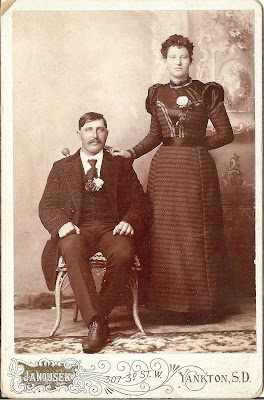 Andrew Anderson and his wife, Anna Peterson.  They would be my great grandparents.  He was born in Denmark in 1874, she was born in South Dakota in 1879. 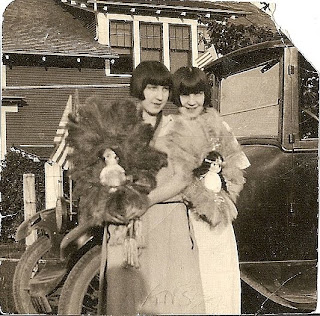 My Grandma Esther on the left and her identical twin sister, Violet on the left.  They look to be in their late teens, having the classic "flapper" haircut style. 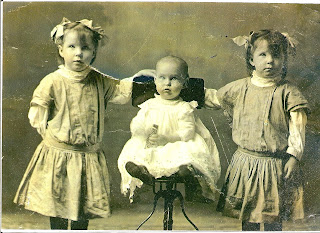 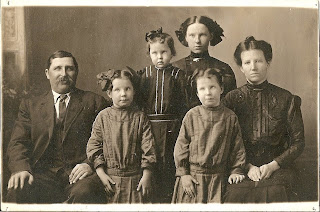 Andrew Anderson, twins Esther and Violet, Anna Peterson Anderson,
Back Row: Gladys and Alma
There was a younger son, Llewelyn, who died at an early age.
The Johnsons 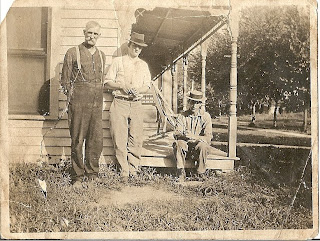 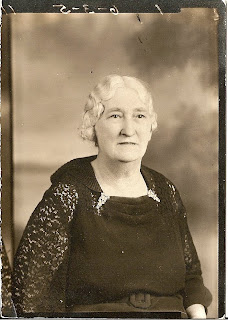 Nellie Adjustine Parent Johnson
1869-1947
Married to Percy Johnson
I wish I had more pictures of her.  I am still on my quest to find more! 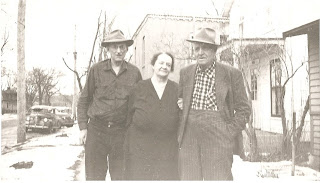 Available in my etsy shop now!

Available in my etsy shop now!

You can find me on ravelry

Words cannot describe how sweet and funny this little creature is!

This is an original crochet pattern designed by me. Available in my Etsy shop!

Pattern Available In My Etsy Shop